Image Of The Virgin Mary Appears In Glenn Beck’s Tears 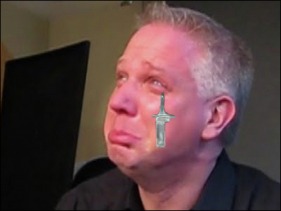 An untold number of people viewing Glenn Beck’s program on FOX News this evening claim that they witnessed an image of the Virgin Mary in one of Beck’s tears. The tear, which streamed down Beck’s face during one of the commentator’s frequent crying jags, was noticed by a large number of viewers who began calling and e-mailing the program and flooding blogs and social networking sites . A spokesperson for FOX News said that the show’s telephone switchboard began to light up almost immediately after Beck began crying over the lost innocence of the Nation, Barack Obama’s disregard for the Constitution, America’s descent into socialism, Michelle Obama’s wardrobe, the number of people who are presently persecuting him, czars, George Soros, and the pending expiration of George Bush’s tax cuts. “I’m not exactly sure what happened, but people sure believe they saw something,” said Claire Calzonetti, Associate Producer of Beck’s show. “And if they want to say it was the Virgin Mary, and if that keeps the ratings up, then Virgin Mary it is.” The Roman Catholic Archdiocese of New York, where the show is broadcast, has not received any requests to authenticate the image as of yet. “Many people believe they see images of Jesus Christ or of the Virgin Mary, and it reaffirms their faith,” said Archbishop Timothy M. Dolan. Why, I saw a cloud as I was driving to work today that looked just like Delaware“ Glenn Beck, a former Catholic who is now a member of the Church of the Latter Day Saints, could not be reached for comment. Calzonetti has dismissed the suggestion that Beck’s viewers were influenced during the program by the chyron which read “ Do Glenn Beck’s Tears Look Like The Virgin Mary? 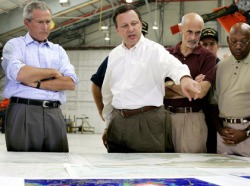 Determined to avoid the type of public relations fiasco that followed Hurricane Katrina, the Bush administration has authorized the Federal Emegency Management Agency (FEMA) to release "All resources at it's disposal" for an effort targeted at keeping the White House from appearing incompetent in the wake of Hurricane Hannah. White House Press Secretary Dana Perino, speaking at her daily press briefing, said, " There was so much damage caused by Katrina , ranging from the extremely critical coverage of the President to a tragic drop in the President's approval rating, that we recognized changes need to be made.  President Bush wants Americans to know that, on his watch, such a public relations catastrophe will never happen again."  Perino said FEMA has already sent a specially trained unit of speechwriters, advertising consultants, and polsters to North Carolina to prepare for the aftermath of Hurricane Hannah. "FEMA will be working closely with local law enforcement and emergency responders to make certain that, no matter what the situation on the ground, the American public will be given the perception that the Federal Government responded quickly and effectively."

Listen to Glenn' classic, "Will Gold Even Be Legal"? bit! Glenn once again hits the nail on the head in his spot on portrayal of a paraonid unhinged conspiracy nut. Priceless!